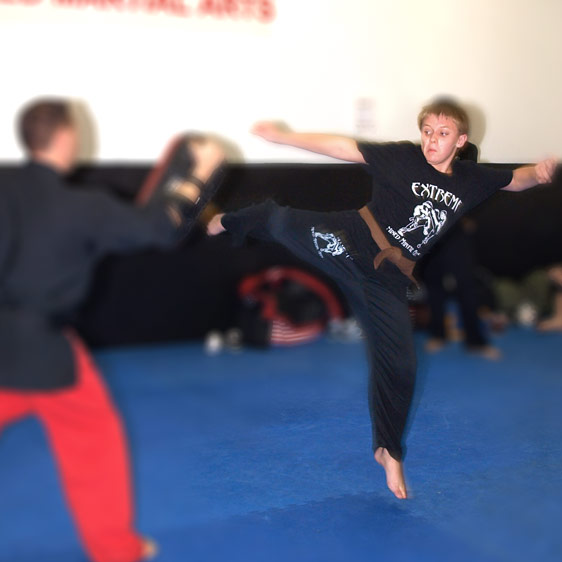 One minute 8-year-old Matt Cesario was sitting atop a swing set with a neighbor and the next he was hanging from the side support brace by his right knee—a twist of fate that spared Matt’s spine and changed the course
of his young life for the next five years.

Matt can’t recall much from the accident, but his mother, Debbie Cesario, remembers it as if it happened yesterday. “We were at the neighbor’s for dinner where Matt was playing. I heard Matt scream when he fell, but by the time I got to him he’d already unhooked his leg and dropped to the ground,” Debbie explained. “I was relieved to see he was conscious, able to stand and “run off” to continue playing,” she said.

However, her relief was short lived. “At 4 a.m. Matt was in horrible pain and couldn’t bend his knee,” Debbie said. Matt does remember that morning and the ER doctor telling him “it was sprained, to put ice on it and take it easy for a couple of weeks.” According to Matt, now age 13, the next two weeks were anything but easy. “My
knee got hit or pulled two different times,” he lamented. “After the second hit, my knee really hurt so I knew something was wrong,” Matt said. Fortunately, a neighbor knew Dr. Steven Chudik from her work at Hinsdale Hospital and recommended Matt see him.

The ensuing MRI and diagnosis was a torn right anterior cruciate ligament (ACL). “Because of his age, Dr. Chudik said we had to make a choice—either keep him out of all activities for the next several years until he grew more, or have arthroscopic surgery to repair Matt’s ACL,” Debbie explained. “We couldn’t bring ourselves to turn a young, active boy into an inactive, sedentary person, so we opted for surgery.”

“With ACL surgery, the torn ligament is replaced with a tendon graft,” explained Dr. Steven Chudik. “In a child, though, current surgery techniques risk damage to their growth plates which can result in deformity and uneven leg growth,” he said. “For that reason, many surgeons will not operate. However, I developed an arthroscopic technique that replaces the ligament while completely avoiding the growth plates,” Dr. Chudik explained. “Matt was one of my first patients to have this procedure.

Following the arthroscopic ACL surgery, one week in a cast and five months of physical therapy, Matt returned to playing baseball as a catcher, bowling, hunting and being one of the fastest runners in his school. However, Matt is most proud of his newest athletic endeavor—extreme mixed martial arts—that he started in 2010. “The classes include kick boxing, boxing, martial arts, street jiujutsu and street defense,” Matt explained. “The boxing class is adult level so I’m the youngest one there,” he added.

According to his mother, Matt’s involvement in the extreme sports makes him more flexible and works his entire body—especially his legs. “Had anyone asked me five years ago when Matt first got injured if he’d be able to do anything like this, I would have said no,” Debbie said. “I was worried if Matt would even be able to slide in baseball. We owe a lot to Dr. Chudik and the arthroscopic ACL surgical technique he developed for children.”
Matt agrees as he displays the one-inch thick wood boards he broke with his bare foot and the brown/black belt he recently earned. 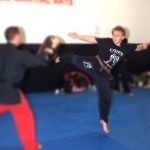 New ACL arthroscopic procedure by Dr. Steven Chudik lets active kids stay active
One minute 8-year-old Matt Cesario was sitting atop a swing set with a neighbor and the next he was hanging from the side support brace by his right knee—a twist... END_OF_DOCUMENT_TOKEN_TO_BE_REPLACED