Through evaluating the strengths and weaknesses of these previously described devices, we attempted to design a novel device and technique. Our efforts resulted in a percutaneously applied, low profile, fixed-angle plate with means to secure tuberosity fragments with tension band suture.

This new experimental design possesses many theoretical design advantages over the previous methods of fixation described for the treatment of displaced proximal humerus fractures. With the use of limited cadaveric model, we were able to demonstrate improvements in biomechanical properties relative to the ASIF T-plate. The differences in biomechanical properties between noncomminuted and comminuted trials reveal the significant role that fracture configuration plays in the fixation. The comminuted fractures, with the T-plate or experimental design exhibited significantly less stiffness and ultimate load before failure and significantly higher values for displacement at physiologic loads.

Content provided by Dr. Chudik not to be used for diagnosis and treatment. You can receive a proper evaluation and diagnosis by making an appointment with Dr. Chudik 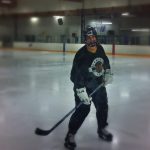 Nagel skates through two orthopaedic surgeries, returns to league play but maybe not snowboarding
Teaching your children to snowboard should be a fun and rewarding experience, or so Nick Nagel thought until he found himself planted face down in a snow bank with a... END_OF_DOCUMENT_TOKEN_TO_BE_REPLACED