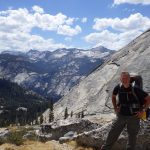 A race against time: Frantz’s passion versus prudence
Since 2008, participation in hiking and backpacking in the United States has increased 62 percent to more than 47 million people. Mark Frantz is one of them having backpacked since... END_OF_DOCUMENT_TOKEN_TO_BE_REPLACED