Surgery is typically performed after the injured knee regains full range of motion and proper muscle control, generally three to four weeks following the injury. During ACL surgery, the torn ligament is typically replaced (reconstructed) with a graft because the ligament is so damaged that a simple repair usually is not possible. Common grafts used to replace the torn ligament include the hamstring tendons, bone-patellar tendon-bone, quadriceps tendon or allografts from cadavers. Tunnels are drilled into the femur and tibia, bones of the knee in which the graft is secured and replaced. The goals of the surgery are to reconstruct the torn ligament, repair any other damaged structures (including meniscus, other ligaments, or cartilage) and restore function and stability to the knee

Dr. Chudik is developing techniques for tunnelless ACL surgery. This surgery is a less invasive procedure that reconstructs the ACL without drilling large tunnels in the bones of the femur and tibia and better reproduces the normal anatomy and function of the ACL. It will be performed as an outpatient procedure (go home the same day) with general anesthesia and an adductor or femoral nerve block. The nerve block involves injecting numbing medicine around the nerves of the leg by the anesthesiologist just prior to the surgery. The torn ACL is replaced by a graft that is aligned and secured in place with special fixation devices on the bone surface where the original ACL was connected and without drilling large tunnels in the femur and tibia as done with traditional ACL reconstruction techniques. Each graft type has its own risks and benefits. Prior to surgery, Dr. Chudik will discuss the type of graft that is best for you.

Dr. Chudik has filed patents and developed less invasive tunnelless techniques and instruments to reconstruct the ACL and PCL without drilling large tunnels in the bones of the femur and tibia and better reproducing the normal anatomy and function of the ligaments. Under development. This special procedure is currently under development. 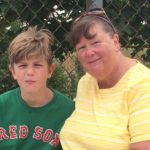 Knee replacements, customized care plan have Irwin cheering again from the bleachers and soccer fields
Kathy Irwin’s weekends are filled with swimming and gymnastic meets, and basketball, soccer, hockey and baseball games. However, they weren’t before Dr. Steven Chudik with the Steven Chudik MD Shoulder,... END_OF_DOCUMENT_TOKEN_TO_BE_REPLACED