Current clinical studies support the use of anatomic ACL reconstructive techniques via either paraphyseal, transphyseal, or epiphyseal graft positioning with either metaphyseal or epiphyseal graft fixation. Although there is a consensus that reconstructions via fixation devices or bone grafts that traverse the physis carry a high risk for growth abnormalities and are inappropriate, it is not known which technique of ACL reconstruction provides the least risk and best restores the anatomy and function of the ACL in the growing child.

From the results of our study, we cannot advocate any single femoral reconstructive technique. An epiphyseal femoral technique may reduce the risk of angular deformity and allow a more optimal femoral graft position after growth as opposed to transphyseal and over-the-top techniques. However, the epiphyseal technique may possess an increased risk for rotational deformity, physeal injury, and articular surface injury.

Content provided by Dr. Chudik not to be used for diagnosis and treatment. You can receive a proper evaluation and diagnosis by making an appointment with Dr. Chudik

Athlete and an ACL Injury: When is it safe to return to your sport? 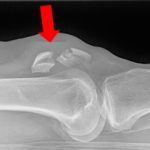 Susan Swanson’s determination to resume activities after a patella fracture drives need for a new surgical repair procedure
Returning home after a vacation is never fun. For Susan Swanson, though, leaving her Michigan vacation with friends changed the next year of her life. Leaving the hotel lobby, Swanson... END_OF_DOCUMENT_TOKEN_TO_BE_REPLACED