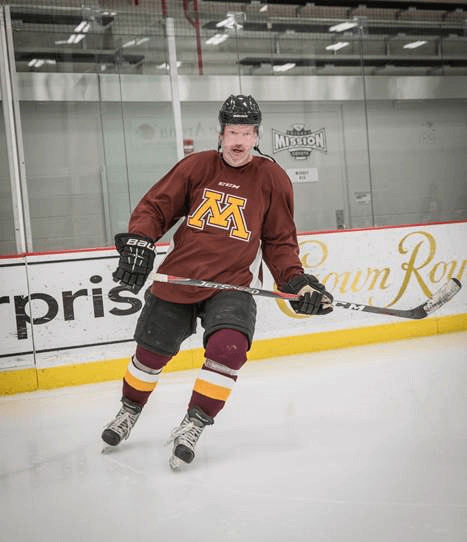 After sitting at a desk all day managing insurance investments, Scott Edwards looks forward to his recreational activities of running and playing hockey. However, Edwards is not just a casual participant. He plays on several hockey clubs, as well as pick-up games when teams need a strong forward. During a fast-paced club game, Edwards raced down the ice and stretched forward to reach the speeding puck when he thought an opponent caught his leg with a skate. When he looked around, though, no one was near him, but the pain in his leg was sharp and debilitating. What Edwards did not know his leg pain was from a proximal hamstring rupture.

As a hockey player, Edwards was used to “nursing” injuries, so he followed the R.I.C.E therapy plan of rest, ice, compression and elevation. However, his symptoms did not lessen. “Because my pain didn’t go away, I scheduled an appointment with an orthopaedist who didn’t find anything from the X-rays he took. Therefore, I was advised to continue doing what I’d been doing and take over-the-counter pain relievers if I needed,” Edwards said. “But after several months, I wasn’t getting any better with this conservative treatment approach, so I called Dr. Chudik who was recommended to me by a teammate,” he added.

The hamstring comprises several muscles that attach by their tendons to the ischial tuberosity of the pelvis bone, cross the hip joint, run down the back of the thigh, cross the knee joint and attach to the tibia and fibula bones just below the knee. The hamstrings are important for bending, stabilizing the knee and straightening the hip. According to Dr. Chudik, most hamstring injuries usually occur at the muscle-tendon junction and the tendons remain attached. This is a typical hamstring strain or pull which can heal with active rehabilitation. However, Edward’s injury was a complete rupture of the tendon off the pelvis bone and the hamstring muscles retracted down his leg. Surgery to reattach the hamstring tendons was his only option to relieve symptoms and restore function.

Dr. Chudik remembers Edwards’ surgery well. “It was very tense in the operating room because I had to delicately dissect retracted and scarred muscle off the sciatic nerve as the tendon also had scarred to the nerve,” Dr. Chudik explained. “This happened because of a delay in diagnosis
and treatment. Over time, the muscle retracted and scarred to other tissues in Edward’s thigh, including the sciatic nerve.”

Additionally, Dr. Chudik recalls the tissues being so dense from the scaring that it almost was impossible to distinguish between the hamstring tissue and the sciatic nerve. “Once the hamstring tendons were dissected free, they did not reach the pelvis,” Dr. Chudik said. “To reattach the hamstring, I had to reconstruct (create) a new tendon with an allograft (cadaver) Achilles tendon.” 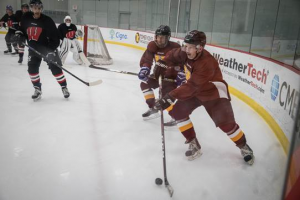 After eight weeks of crutches and a brace, Edwards was finally able to start walking on his own and begin physical therapy. “I had to strengthen and retrain my leg muscles,” Edwards said. “It took several months of rehab, but I’m now back to playing hockey, swimming, doing Yoga and core conditioning. I’m very happy with where I’m at. I feel great. 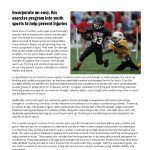 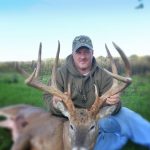 Second shoulder work injury jeopardized Kucera’s job, bow hunting pastime
Kevin Kucera is among the countless people who suffer aches and pains after they move, lift, push and pull things. However, the day after Kucera moved a heavy display on... END_OF_DOCUMENT_TOKEN_TO_BE_REPLACED